Penguins swim underwater at up to 25 miles per hour.

Penguins can’t fly. Although they have wings, they are one of the world's 40 species of flightless birds (such as the kiwi or the emu). What differentiates them from their counterparts is the exceptional ability to swim they have developed through evolution. While they might look awkward and clumsy walking on land, they are amazing swimmers once they dive into the sea. 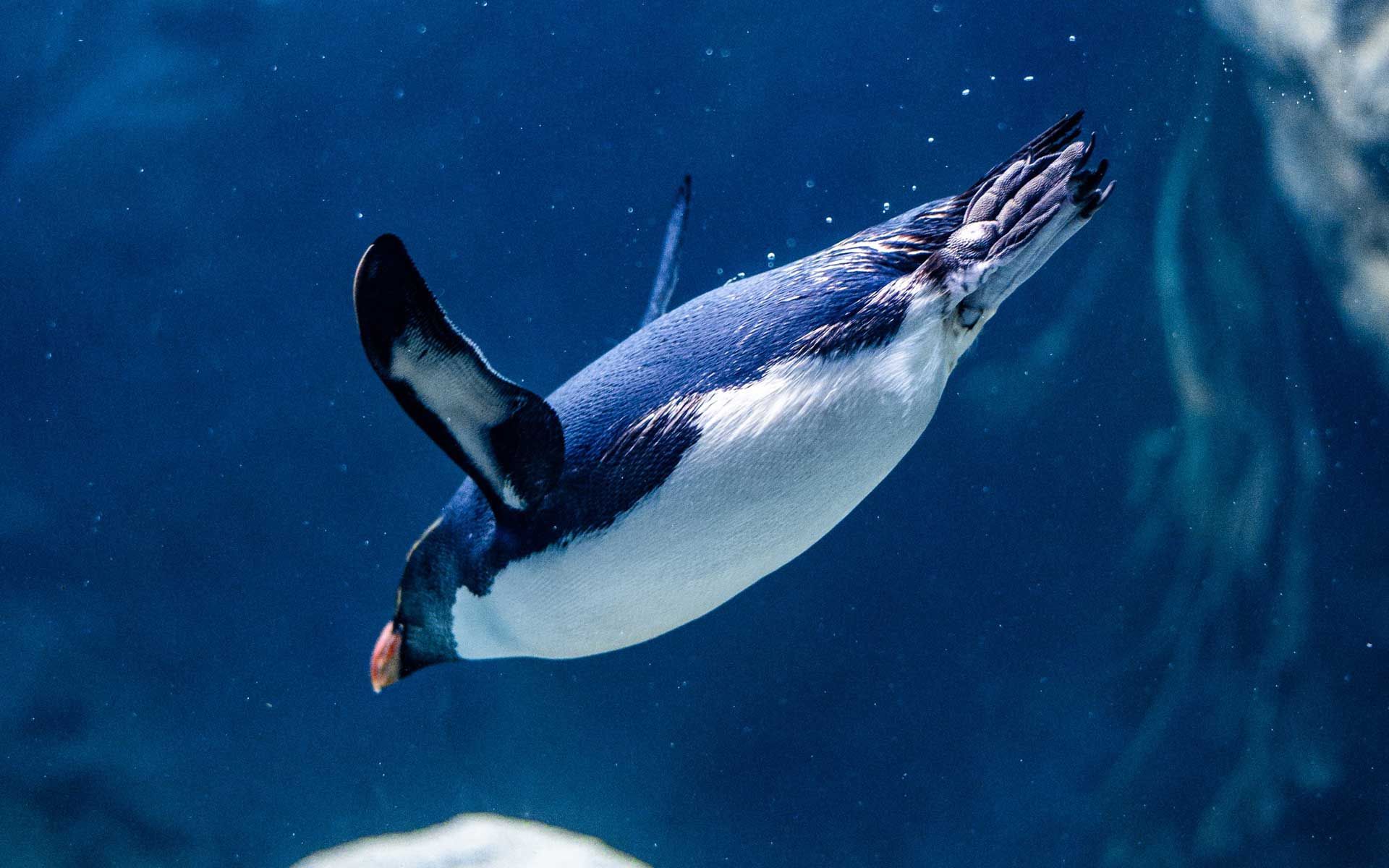 The term “Penguin” comes from the Welsh language, where “pen” means head and “gwyn” means white. They have very distinct black and white feathers that make what has been named the “tuxedo” look. This creates countershading on the water, and it helps them camouflage from potential predators. Seen from above while swimming, their darker shade of feathers blend with the dark tones of the ocean. On the other side, while seen from below, their light toned feathers look similar to the light coming from the surface of the ocean.

Penguins are incredible swimmers. They actually spend about 75 percent of their time in the water, so although they have wings, these are not ideal for flying. Their wing structure has evolved and is optimal for swimming. They have in fact very powerful flippers that allow them to swim for long distances and at lower depths. These flippers have a similar movement to the wings of a flying bird, so it may appear as though they are flying underwater. Penguins use both downstroke and upstroke with their flippers and have also developed strong back and chest muscles to help them work against the high density of water.

But not only are their wings designed to swim. Their body structure is also optimized for underwater activity. With their torpedo-shaped body, they can reach swimming speeds of 25 miles per hour underwater. Also, their legs are placed at the far back end of their body, helping minimize drag, and they steer with their webbed feet.

One of the main reasons why penguins are such fast swimmers is because they are able to reduce drag by fluffing their feathers and releasing bubbles under water. The water density around them is temporarily reduced, together with their drag, which allows them to triple their swimming speeds.

Penguins usually swim at a distance of 1 to 2 meters below the surface, using a technique known as porpoising. They skim through the water using consecutive leaps. This allows them to move underwater while being able to breathe without slowing down. It also acts as a defense mechanism as the continuous movement above and below the surface makes it difficult to get caught by predators.

Oddly enough, they are not the best at swimming on the surface (where they can paddle like a duck at most) and there is one thing that these swimming masters cannot do, that is swim backwards.

Penguins are also very good divers, and are able to hold their breath for approximately 6 minutes under water which helps them go to depths from 9 to 18 meters below the surface. Penguins are known to swallow small stones together with their food. This may not only help them with digestion, grinding food in their stomach, but also helps them to dive deeper by adding extra weight.

Out of all the species of penguins, the Emperor Penguin can dive deeper and for longer than the rest. It’s bones are solid, taking away the risk of barotrauma that air-filled bones can cause, and their heart rate can slow down to 20 beats per minute. With this, they can shut down non essential organs during their longer dives.

It is believed that penguins can’t fly because, in the past, they had no predators. That meant they had no need to fly away from possible threats. Also, by relying on the ocean for finding food, a well developed set of flippers seemed more important than having wings that could fly.

Nowadays however, penguins have not been able to avoid human impact, and climate change is very much affecting their habitat. Illegal fishing and oil spills are other possible threats that these charming creatures can fall victim of.